The natural habitat of the writer Alberto Manguel, tagged by The Economist as a “literary omnivore”, is reading, writing, and the library. In his TLS review of The Meaning of the Library: A cultural history (2015) edited by Alice Crawford, he wrote:

“We are intrinsically nostalgic animals for whom mourning is a form of recognition. Our preferred genre is the elegy. As long as something remains obviously present, we pay little attention to it, but as soon as we believe that it’s fading away, we feel irresistibly attracted to the ruins.”

Manguel spoke of hoarding (rather than collecting) books in The Library at Night (2005). It is a theme that many have pursued, including famously Jorge Luis Borges. A library is a testament to a journey through life, one that speaks of highways and byways, faded tracks and dead ends. A library is a record of embarkations and – as Marcel Proust, Stefan Zweig, and Italo Calvino testify – a way of naming the past.

And then there are the visual arts, especially film and photography, which encourage armchair time travel. Eugène Atget in France, Francis Frith in England, and Sergei Prokudin-Gorsky in Russia – pioneers in the nostalgia industry.

Is nostalgia a phenomenon that only dates back to the impact of the industrial revolution? Was the creation of countless 19th century museums a response to the gradual realisation that much had vanished and would continue to vanish? William Wordsworth, Thomas Hardy and W. G. Sebald explored loss in their writings. In music, Brahms gave a voice to longing, Edward Elgar depicted past glories and Gustav Mahler lamented lost youth and the erosions of time. 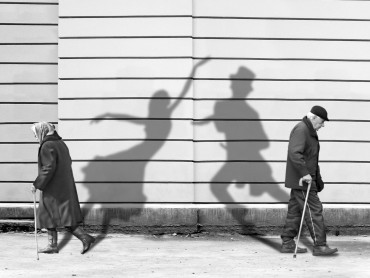 We are nostalgic for the past because, like an old photograph, it is fading. As Manguel points out, we mourn the irreparable loss of time and place and the inability to say or do what has been left unsaid or undone. The end of another year with its bittersweet farewells to old friends remind us that we are only passing through: sentient beings with a foreknowledge of our own death. In The Thirteenth Tale (2006), Diane Setterfield puts it this way:

“People disappear when they die. Their voice, their laughter, the warmth of their breath. Their flesh. Eventually their bones. All living memory of them ceases. This is both dreadful and natural. Yet for some there is an exception to this annihilation. For in the books they write they continue to exist. We can rediscover them. Their humor, their tone of voice, their moods. Through the written word they can anger you or make you happy. They can comfort you. They can perplex you. They can alter you. All this, even though they are dead. Like flies in amber, like corpses frozen in the ice, that which according to the laws of nature should pass away is, by the miracle of ink on paper, preserved. It is a kind of magic.”

In 2010 another kind of magic made headlines: a holographic device that could transmit three-dimensional images in close to real time. In 2015 researchers devised a series of tiny plasma holograms that are touch-sensitive and which can be programmed to change shape and form when manipulated. Today, digital media are commonplace, but before the 21st century comes to an end, image and sound will converge in digital replicas of people. They will be invested with complete life-histories: interactive holograms that can talk, sing, dance and – crucially – remember. It will be a virtual life after death.

No longer constrained by the fetters of time, these holograms – “nurslings of immortality” (to use Shelley’s vivid expression in Prometheus Unbound) – will await resurrection in the global library of digital memories. Nostalgia will become a thing of the past. Even so, we should probably keep in mind the slightly mocking warning in Proust’s In Search of Lost Time: “Remembrance of things past is not necessarily the remembrance of things as they were.”