Scuppernongs are a variety of muscadine, a species of grape native to the southern USA. Greenish or bronze in colour, they might have languished in obscurity but for Harper Lee’s vibrantly humorous anti-racist novel. 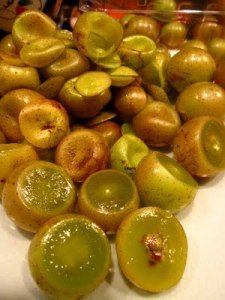 In 1585, describing North Carolina to Sir Walter Raleigh, the English explorer Ralph Lane wrote, “We have discovered the main to be the goodliest soil under the cope of heaven, so abounding with sweet trees that bring rich and pleasant grapes of such greatness, yet wild, as France, Spain, nor Italy hath no greater…”

First cultivated during the 17th century, the name scuppernong can be traced back to the Algonquian word ascopo meaning “sweet bay tree”. Today, the scuppernong is the state fruit of North Carolina.

To the perplexity of non-locals, scuppernongs are mentioned in To Kill a Mockingbird, the first and only novel by Harper Lee, who received the Pulitzer Prize for Fiction in 1961 and the National Medal of Arts in 2011:

“Our tacit treaty with Miss Maudie was that we could play on her lawn, eat her scuppernongs if we didn’t jump on the arbor, and explore her vast back lot, terms so generous we seldom spoke to her, so careful were we to preserve the delicate balance of our relationship…”

The novel deals with the racism that the author observed as a child in her hometown of Monroeville, Alabama. It tells the story of white lawyer Atticus Finch – memorably played by Gregory Peck in the 1962 film – who defends a black man accused of rape. Interwoven and equally important are the moral lessons Atticus’s children learn about their shy neighbour Boo Radley. The book is great for these reasons, but also because it is a darn good yarn in the tradition of Mark Twain, who “never let my schooling interfere with my education.” 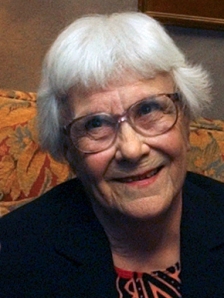 Harper Lee (photo right) showed the manuscript of the book to an editor at J. B. Lippincott & Co., a major publisher of schoolbooks for elementary and high school education. Two and a half years of rewriting followed before publication on 11 July 1960. It became an immediate bestseller, winning huge critical acclaim. In 1999,  in a poll by the Library Journal, it was voted “Best Novel of the Century”.

But it was not always plain sailing. In 1966, Lee wrote a letter in response to attempts to ban To Kill a Mockingbird as “immoral literature”. The gently mocking tone recalls the book:

“Recently I have received echoes down this way of the Hanover County School Board’s activities, and what I’ve heard makes me wonder if any of its members can read. Surely it is plain to the simplest intelligence that To Kill a Mockingbird spells out in words of seldom more than two syllables a code of honor and conduct, Christian in its ethic, that is the heritage of all Southerners. To hear that the novel is ‘immoral’ has made me count the years between now and 1984, for I have yet to come across a better example of doublethink. I feel, however, that the problem is one of illiteracy, not Marxism. Therefore I enclose a small contribution to the Beadle Bumble Fund that I hope will be used to enroll the Hanover County School Board in any first grade of its choice.”

At the age of 87, Harper Lee is said to be living in an assisted-living facility, wheelchair bound, partially blind and deaf, and suffering from memory loss. But she probably remembers scuppernongs and perhaps even her delightful book – which ought to be required reading in today’s still racist world.

8 thoughts on ““To Kill a Mockingbird” and scuppernongs”