Celebrations take place in 2012 of the 200th anniversary of the birth of Charles Dickens, one of the greatest story-tellers of all time. Meanwhile, Christmas approaches – a season that Dickens held close to his heart.

Before he began the series of annual Christmas stories that appeared in Household Words, the periodical he started in 1850, Charles Dickens wrote five Christmas books. The first and best known, was A Christmas Carol (1843). In her new biography Charles Dickens: A Life (2010), Claire Thomalin recounts how Dickens told a friend that, “he had composed it in his head, weeping and laughing and weeping again, as he walked about ‘the black streets of London, fifteen and twenty miles, many a night when all the sober folks had gone to bed’.”

Dickens was horrified at the indifference of the rich to the plight of the poor, who had little education, no health care, and saw their children working in factories and scavenging the streets. A Christmas Carol was followed by The Chimes (1844), The Cricket on the Hearth (1845), The Battle of Life (1846) and The Haunted Man (1848). In a note added to the first Library Edition of these works, Dickens wrote, “My purpose was, in a whimsical kind of masque which the good-humour of the season justified, to awaken some loving and forbearing thoughts, never out of season in a Christian land.”

Dickens did not invent Christmas. Traditionally, it was a one-day holiday when presents were given to children, a time of rest when entertainment consisted of acting, reading aloud, music and parlour games. Christmas cards were only introduced into Victorian England in 1846 and Christmas crackers in the 1850s. But the publication of A Christmas Carol, which immediately sold 6,000 copies, had a profound impact. Claire Tomalin again:

“The book went straight to the heart of the public and has remained lodged there ever since, with its mixture of horror, despair, hope and warmth – a Christian message – that even the worst of sinners may repent and become a good man; and its insistence that good cheer, food and drink shared, gifts and even dancing are not merely frivolous pleasures but basic expressions of love and mutual support among all human beings.”

The sentiment was not new to Dickens, nor did he contrive it as a cynical ploy to sell copies of the book. Much earlier he had written “A Christmas Dinner”, published anonymously as one of the Sketches by ‘Boz’, Illustrative of Every-day Life, and Every-day people (1836). In it he wrote:

“There are people who will tell you that Christmas is not to them what it used to be; that each succeeding Christmas has found some cherished hope, or happy prospect, of the year before, dimmed or passed away; that the present only serves to remind them of reduced circumstances and straitened incomes – of the feasts they once bestowed on hollow friends, and of the cold looks that meet them now, in adversity and misfortune. Never heed such dismal reminiscences… Reflect upon your present blessings – of which every man has many – not on your past misfortunes, of which all men have some.” 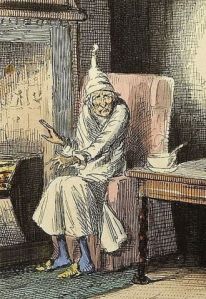 The story is so popular it has been turned into plays, musicals, radio and TV productions and at least 21 films. The most memorable and effective is the black and white Scrooge (1951) – titled A Christmas Carol in the US where it became a Christmas television perennial to rival The Wizard of Oz. It starred the wonderful and mesmerising Alastair Sim as Scrooge, Michael Hordern as Marley’s ghost, and a host of upcoming British actors. Directed by Brian Desmond Hurst, the Victorian London setting is effective, alternating between a picture-postcard white Christmas and brief glimpses of poverty in which homeless women clutch their children to their ragged bosoms. Such images implicitly rebuke Scrooge for his callousness and remind the viewer of Dickens’ own reforming zeal.

Nevertheless, it is worth going back to the novel, reading and enjoying Dickens’ incomparable writing, and reminding ourselves that in many places the social and cultural structures that led to the oppression and exploitation he so vehemently opposed are still with us.