In 1926 Buster Keaton bought a home in Beverly Hills that became known as the Italian Villa. Keaton later remarked, “I took a lot of pratfalls to build that dump.” The house featured in one or two of his films and in the 1950s was the scene of a remarkable discovery. 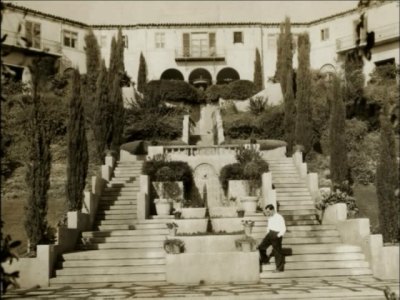 Named “the Italian Villa” the house contained 20 rooms over three acres, with a pool, tennis court, guest house, and a small shed in which Keaton cut his films and stored a collection of his own private prints. In her book Buster Keaton: Cut to the Chase (1995), Marion Meade writes:

“On the knoll of a hill, overlooking a rolling lawn, the pale green stucco mansion rose like a fifteenth-century suburban house transplanted from the Venetian countryside. Against a backdrop of cypresses and palms a staircase of exactly sixty steps descended to a thirty-foot Romanesque swimming pool, flanked by classical nude statues and inlaid with mosaic tiles. The steep terraces had been landscaped by a gardener who once worked for Pope Pius XII.”

In 1932 the house suffered considerable damage from a fire in the nursery and dining room. Keaton was not at home at the time and his wife and children escaped unharmed, staying at the home of Tom Mix until the following morning.

In 1955 Raymond Rohauer (1924-87), the American film collector and distributor and at that time head of the Society of Cinema Arts in Los Angeles, began collecting Keaton’s films. Actor James Mason, then living in Keaton’s former home, had just discovered a cache of positive prints of films in a secret vault behind the projection room. The stash – long forgotten by Keaton – included a superior print of The General and one of Parlor, Bedroom and Bath, which was shot at the Italian Villa. 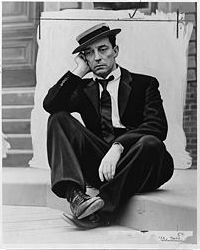 Building on this collection and negatives and positives from the MGM vaults, Rohauer set up a corporation for Keaton and transferred the films to safety stock. After a complicated series of negotiations, he obtained the rights to the films from the surviving trustee of Buster Keaton Productions, Inc., and began exhibiting them in festivals all over the world. Rohauer clearly knew the commercial value of the property, but without his efforts and James Mason’s discovery today’s audiences would have been all the poorer.

In the opinion of the late journalist and film critic Roger Ebert, “The greatest of the silent clowns is Buster Keaton, not only because of what he did, but because of how he did it. Harold Lloyd made us laugh as much, Charlie Chaplin moved us more deeply, but no one had more courage than Buster. I define courage as Hemingway did: ‘Grace under pressure’. In films that combined comedy with extraordinary physical risks, Buster Keaton played a brave spirit who took the universe on its own terms, and gave no quarter.”

I’ll drink to that.