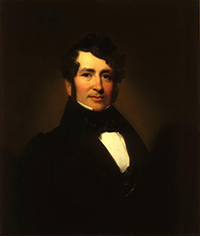 George Pope Morris was a 19th century American poet and songwriter who earned his living editing newspapers and writing literary reviews. His poetry is sentimental, personal, and nostalgic. Morris is best known for just one poem, originally titled “The Oak”, which became a Victorian parlour song:

“Woodman, spare that tree!
Touch not a single bough!
In youth it sheltered me,
And I’ll protect it now.
’Twas my forefather’s hand
That placed it near his cot;
There, woodman, let it stand,
Thy axe shall harm it not.”

Morris was born on 10 October 1802 in Philadelphia, Pennsylvania. Little is known about his early life until the late 1820s when, with fellow writer and editor Nathaniel Parker Willis, he founded the New York Evening Mirror newspaper. It was this paper that obtained an advance copy of Edgar Allan Poe’s famous poem “The Raven”, which it published in 1845.

A talented writer, Morris dedicated himself to producing a periodical that could be enjoyed by all the family. Together with Willis, he established a weekly magazine called The National Press, later renamed Home Journal and then, from 1901, Town & Country. During the 19th century, it featured poetry, essays and fiction. As high society began to read it, the magazine focused on society news and gossip.

In a letter to Henry Russell – the English pianist, singer and composer who lived in the USA from 1836 to 1841 before settling in London to produce musical extravaganzas – Morris recounted at length the inspiration for “Woodman, Spare that Tree!”: 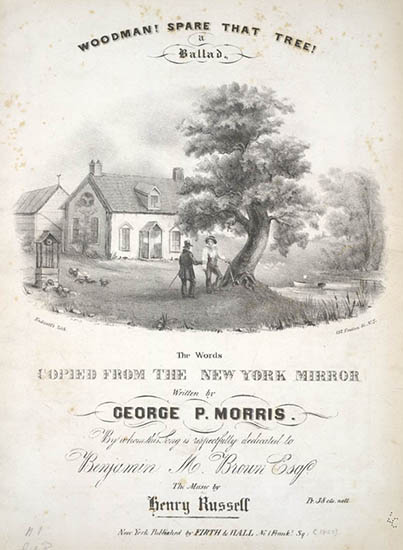 “Riding out of town a few days since, in company with a friend, who was once the expectant heir of the largest estate in America, but over whose worldly prospects a blight has recently come, he invited me to turn down a little romantic woodland pass not far from Bloomingdale. ‘Your object?’ inquired I. ‘Merely to look once more at an old tree planted by my grandfather, near a cottage that was once my father’s.’”

The mother of Morris’s friend had long since been obliged to sell the cottage and, as they neared it, the pair saw an old man sharpening an axe and about to cut the tree down. He was the occupant of the cottage. “What do you intend doing?” asked my friend with great anxiety. “What is that to you?” was the blunt reply. “You are not going to cut that tree down, surely?” “Yes, but I am though,” said the woodman.

Morris and his friend asked how much the tree was worth in firewood. Ten dollars was the reply (the equivalent in purchasing terms of about $250 today). Morris and his friend drew up a bond “witnessed by his daughter; the money was paid, and we left the place with an assurance from the young girl, who looked as smiling and beautiful as Hebe, that the tree should stand as long as she lived.”

Intensely moved by this incident, Morris was inspired to write the poem recalling his friend’s attachment to the old oak:

“My heart-strings round thee cling,
Close as thy bark, old friend!
Here shall the wild-bird sing,
And still thy branches bend.
Old tree! the storm still brave!
And, woodman, leave the spot;
While I’ve a hand to save,
Thy axe shall harm it not.”