Critics of the protests against Donald Trump’s visit to the disUnited Kingdom have forgotten the core values that define a democracy: a constitutionally enshrined right to disagree with political leaders and if necessary to replace them at the ballot box.

Dissent is a vital component of the freedoms that democracy guarantees. The fawning of politicians – Thatcher/Reagan, Blair/Bush, Cameron/Obama, May/Trump and their ministerial cohorts – is no longer swallowed hook, line and sinker by the British public. The claim to a “special relationship” rings hollow.

On a lecture tour of the United States in 1946, the UK’s wartime Prime Minister Winston Churchill used it to describe the depth of Anglo-American friendship. The USA had bailed out Europe militarily and economically in the struggle against Nazi Germany. Since then, the fiction of the “special relationship” – during the Cold War and every conflict in which the USA required British compliance – was invoked to call the UK to heel and to try to drag it away from Europe.

Cracks in the myth of the “special relationship” were papered over. Immoral actions on the part of successive US governments were ignored (notably in Latin America and South-East Asia, where the US was overtly or covertly propping up despicable regimes and assisting them in imprisoning, torturing, and murdering their own people).

Any moral influence the UK may have had in global politics was lost when it became a matter of “Either you are with us, or you are with the terrorists”. Henry Kissinger and his pupil, George W. Bush, promoted their version of Realpolitik: “the law of power governs the world of states just as the law of gravity governs the physical world” (in the definition first given by Ludwig von Rochau, who coined it in 1853).

Giving the cold shoulder to the European Union – which logically ought to be its closest ally – the UK government is trying to make the best of a rogue president whose political and economic agenda is plain: “Only what’s good for me (and America)”. And when Trump speaks of making America great again, to what period is he referring? Great as when Nixon was illegally bombing Cambodia and Laos, or when Ronald Reagan was backing Indonesia’s dictator in the massacre of thousands, or when George W. Bush was condoning a politics of torture in Afghanistan and Iraq?

In “Donald Trump was asked to name one of his heroes” (The Washington Post, 17 January 2017), Chris Cillizza asked him about role models. Significantly, he discovered:

“There is no blueprint for Donald Trump except the one he writes for himself…. The truth is Trump views himself as a prime mover of history, someone who makes new paths rather than following old ones. What Trump was really saying then was that he doesn’t believe in heroes only singular men in history — of which he considers himself one.”

The “special relationship” was hard to define even under Obama – a towering president compared with the present incumbent –  except that we liked the guy and his ideals. Moreover, as Alasdair Soussi pointed out in “The UK and US: The myth of the special relationship” (Aljazeera, 27 February 2017):

“It is the uneven nature of Britain’s relationship with the US – and the fact that America has, in the likes of Canada and Japan, other crucial international partnerships – that has, for the term’s detractors, made it almost redundant in meaning.”

The “special relationship” is invoked for the sake of complicity in global economic strategies largely of benefit to the USA and in order to condone interventions where US military might is aimed at swaying the balance of power. The fact that the UK is impotent when it comes to exerting real influence (the Yemeni Civil War being only the latest case in point) speaks for itself.

The USA, Europe, Russia, China, and Latin America acting en bloc could guarantee the planet’s survival and its future stability by collectively tackling the major issues facing humankind: poverty, scarcity of resources, and climate change. That would be a special relationship worth crowing about. Instead, we are obliged to protest against a megalomaniac whose only “special relationship” is with himself. 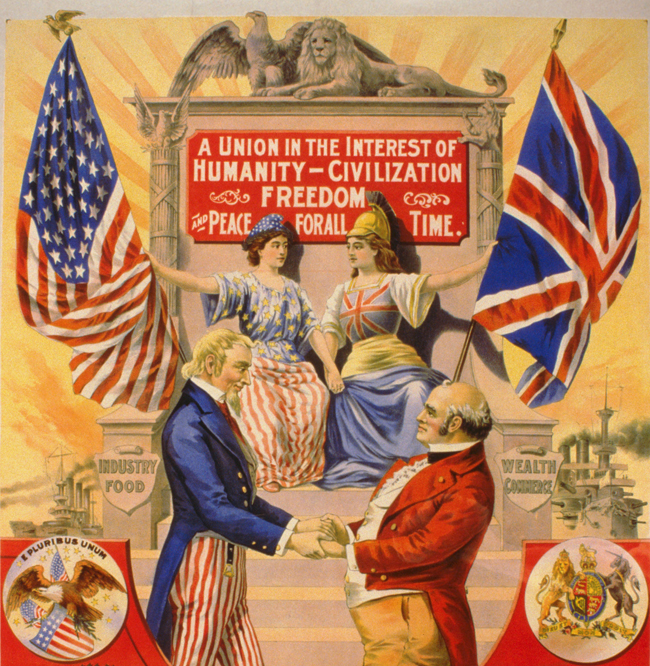 2 thoughts on “What price the “special relationship”?”