For over a century, Canada tried to assimilate its Aboriginal people, including setting up a system that sanctioned the kidnapping of native children. A reckoning was long overdue.

“The central goals of Canada’s Aboriginal policy were to eliminate Aboriginal governments; ignore Aboriginal rights; terminate the Treaties; and, through a process of assimilation, cause Aboriginal peoples to cease to exist as distinct legal, social, cultural, religious, and racial entities in Canada. The establishment and operation of residential schools were a central element of this policy, which can best be described as ‘cultural genocide’.” 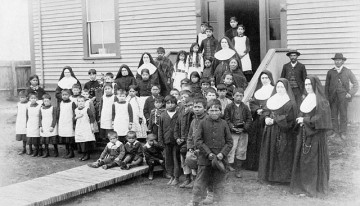 These terrible words come from Honouring the Truth, Reconciling for the Future, the Final Report of the Truth and Reconciliation Commission of Canada. It appeared after six years of intensive research, including 6,750 interviews about the notorious system of government-mandated, church-run residential schools. The last residential school operated by the Canadian Government was closed in 1996.

Canada is not alone in its struggle to come to terms with the legacy of its past. In the 1870s, the US federal government forcibly sent tens of thousands of American Indian children to boarding schools – largely recollected as a time of abuse and cultural desecration.

Australia long practised its own form of barbarism. In 2008, the country’s then Prime Minister publicly apologised to Indigenous Australians for “the laws and policies of successive Parliaments and governments that have inflicted profound grief, suffering and loss on these our fellow Australians…for the pain, suffering and hurt of these Stolen Generations, their descendants and for their families left behind.”

In 2009 in Ireland, that bastion of sectarian intolerance and bigotry, a nine-year investigation into the country’s Roman Catholic-run institutions ended with the publication of a report detailing how for decades priests and nuns terrorized thousands of children in workhouse-style schools – and government inspectors failed to stop the abuse. Five years later, in 2014, a horrific story emerged of 796 babies who died in a home for unmarried mothers under the care of nuns in Tuam, County Galway, between 1925 and 1961.

Australia and Ireland have pledged to investigate, to name and shame, and to make reparation. So has Canada. But now that the Commission has finished its work and politicians have indulged in public hand-wringing, government prevarication looms. Long-standing critical questions of land and treaty rights will remain unresolved and native peoples will be left with vague and ineffectual promises to consider these matters at a later date.

The 130-plus residential schools that operated in Canada were born of Christian idealism heavily doused in racism and an ideology of assimilation. Over 120 years, more than 150,000 Aboriginal children were dragged kicking and screaming from their families only to be neglected and physically, mentally and sexually abused. It is possible that some establishments were milder than others and that some of those in authority were kind. But the iniquity of the system far outweighed any good.

The Final Report of the Truth and Reconciliation Commission of Canada leaves no stone unturned in its efforts to provide a road map that might lead to a grudging acceptance of what happened – if not to forgiveness or the more elusive reconciliation envisaged by the Commissioners and many others. But, as Thomas King noted in “No Justice for Canada’s First Peoples” (The New York Times, 11 June 2015):

True reconciliation may only be possible through a lengthy process that includes the reshaping of a national, collective memory that comes to terms with history based on principles of human dignity and justice. But it’s as well to remember the words of the late Eduardo Galeano, who wrote in Upside Down: A Primer for the Looking-Glass World:

“Time past continues pulsating, alive, within time present, although time present doesn’t wish it or doesn’t know it. The right to remember does not figure among the human rights consecrated by the United Nations, but today it is more than ever necessary to claim it and put it into practice: not in order to repeat the past, but in order to avoid it being repeated.”