Stirring up a hornets’ nest is something that few people have done in reality. Not so in northern China, where 41 people have been killed since July.

As a child growing up in the south of England, bees were tolerable, wasps were a hazard, and hornets (rarely sighted) were to be avoided at all costs. According to some experts, they are not aggressive unless provoked. Tell that to the marines!

According to a China News Agency report, apart from those who have died from horrific multiple stings, more than 1,600 other people have been injured. Local officials are saying that drier and warmer weather may have contributed to a rise in hornet numbers in the region.

Environmental activists have also blamed rapid urbanisation for worsening the problem as more land is swallowed up for development, intruding into habitats where hornets hunt and build their nests.

The provincial government has dispatched pest control experts to help deal with the situation and local fire-fighters have been given protective clothing and special equipment to remove and destroy hornet nests. It’s likely to be more exciting than rescuing cats from trees.

Experts believe the culprits to be the Asian giant hornet, which grows up to 5cm long with a 6mm sting whose toxic effects can cause anaphylactic shock and renal failure. The Asian giant hornet (Vespa mandarinia), including the subspecies Japanese giant hornet (Vespa mandarinia japonica), is the largest species of hornet in the world with some queens reaching more than 5cm in length. They are found throughout Eastern Asia, particularly in Japan where they are commonly known as the Giant Sparrow Bee.

The Asian giant hornet is intensely predatory, hunting medium- to large-sized insects, such as bees, other hornet species, and mantises. The hornets often attack hives to obtain the honey bee larvae as food for their own larvae. A single scout, sometimes two or three, will cautiously approach the hive, producing pheromones to lead its nest-mates to the location. The hornets can devastate a colony of honey bees.

Not surprisingly, the Asian giant hornet is today listed as a species that is threatened by extinction in the near future, although this is due less to avid swatting than to habitat loss in the form of deforestation.

Anyone squeamish should now look away! 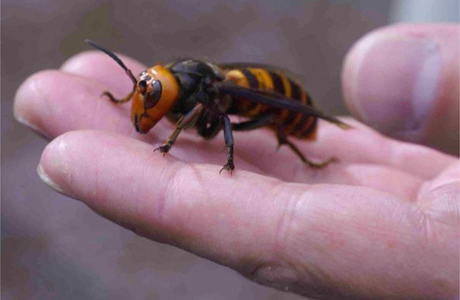