The Magi – or Three Kings – had different names. The Near East knew them as Bithisarea, Melichior and Gathaspa, names that reached the West in the 6th century. An 11th century church document in Belgium lists them as Melchus, Caspar and Fadizarda, after which they turned into Melchior, Caspar and Balthasar. 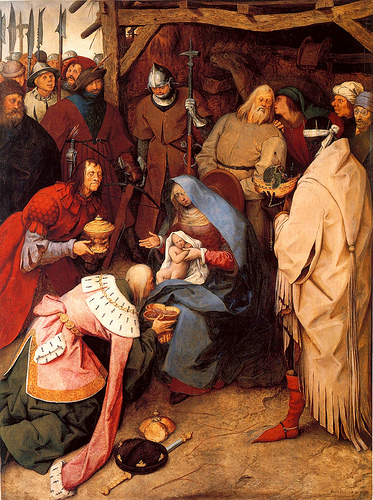 A  fanciful medieval Latin text portrays them in eastern guise. “The first is said to have been Melchior, old and grey, with long hair and a long beard; wearing a blue tunic and a green cloak and shoes of a mingled blue and white and a Mithras bonnet of different colours. He offered gold to the Lord as to a kind.”

“The second, named Caspar, was a beardless, pink-cheeked young man, dressed in a green tunic and a red cloak. His shoes were blue. He honoured God with frankincense as with a gift proper to a God.”

“The third, dusky, with a vigorous beard, was named Balthasar. He wore a red tunic, a white cloak, and green shoes. His gift of myrrh acknowledged the son of man who was to die. Their clothes were all of them silk.”

Pieter Bruegel the Elder’s unusual rendering of The Adoration of the Kings almost treats them as caricatures. The work focuses attention on the Infant Christ on his mother’s lap, at the exact centre of the picture. People crowd around and there is little sense of depth or space. The elongated figures of the Kings are characteristic of a painting style fashionable around this time. One wonders what the man in the green hat is whispering to Joseph.

A figure on the extreme right wears spectacles. His presence may indicate that those around the Infant Christ are blind to his significance. Bruegel used spectacles on other occasions to signify the inability of the subject to see the truth. Most of the figures, in fact, appear to be gently mocked by the artist.

Bruegel was not the first to depict one of the kings as Ethiopian. The tradition began with the Carmelite monk John of Hildesheim (1315-75) and his Historia Trium Regum (History of the Three Kings) based on the medieval teaching that the Magi represented the peoples descended from the three sons of Noah: Shem, Ham and Japhet.

As Geoffrey Grigson writes in The Three Kings (1958): “The truth… is that the quest of the Three Kings answers to something permanent in us all, which comes to us, interpret it as we may, like the reverberations of a bell once rung and never ceasing to reverberate, its long after-note never ending, never lost.”

One thought on “The Three Kings (I)”