Morelia is the capital of the Mexican State of Michoacán. Founded in 1543 with the name Valladolid, it stands on land once ruled by the Tarascan kings. It is a city of pink limestone, elegant façades, fountains and plazas. And in contrast to the current media image of Mexico, it is a city of tranquil beauty. 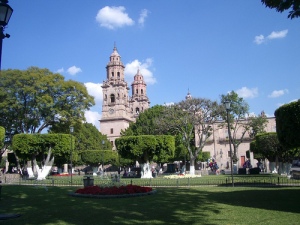 The first settlers in Valladolid/Morelia were Spanish nobles and religious orders who laid out a city of fine buildings, convents and churches. The historic centre has retained its Spanish character over the centuries, despite the accretions of modern life. The city’s name was changed to Morelia in 1828 in honour of José María Morelos, one of the leaders of Mexican Independence from Spain.

The Palacio de Gobierno began life in 1770 as the Tridentine Seminary, attended by several key figures of the Independence, such as the parish priest Miguel Hidalgo. In 1810 it was he who gave el grito (the cry), a call to arms that failed. Bizarrely, no one knows what Hidalgo said at the time. As The Course of Mexican History (1979) states, “The exact words of this most famous of all Mexican speeches are not known, or, rather, they are reproduced in almost as many variations as there are historians to reproduce them.” Hidalgo was executed, but three years later José María Morelos, another parish priest, had greater success. The Palacio contains murals on local themes by the artist Alfredo Zalce (1908-2003), a contemporary of the better known muralists Diego Rivera and David Siqueiros.

In 1590 Dominican nuns took over buildings on the site of today’s convent and church opposite the Jardín de las Rosas (Rose Garden). The Baroque church has gargoyles in the shape of crocodiles and its twin portals are a typical feature of nunneries. The convent was later converted into an orphanage and since 1904 has housed an internationally recognised music conservatory, directed for 20 years by composer, organist, and musicologist Miguel Bernal Jiménez (1910-56). There is a bronze statue to his memory in the courtyard garden.

The Museo Regional Michoacano (the Regional Museum of Michoacán) is one of the best buildings in the city, where the ill-fated Emperor Maximilian lodged during his visits. It houses a collection of local artefacts, including Indian codices, a rare 16th century Bible written in three languages, and an early 18th century oil painting called “The Moving of the Nuns”. It depicts a procession of nuns from one convent to another escorted by local dignitaries.

Travel guides cover all there is to see in Morelia, which can be best (and safely) explored on foot. There are invitingly narrow streets and courtyards to discover and unexpected vistas lit up by purple bougainvillea. Don’t be surprised by the number of butterflies. The State of Michoacán includes part of Mexico’s Butterfly Biosphere Reserve, winter home to millions of Monarch butterflies. The annual migration of the Monarch begins in North America in early Fall, when a special generation of butterflies with a life-cycle of up to nine months flies south. The best time to see them around Morelia is February, when rising temperatures encourage the insects to fuel up on nectar before their long journey north.

One thought on “Morelia – city of revolution and pink limestone”