Timbuktu (once spelt as Timbuctoo), a 1,000 year-old city in northern Mali, was founded by Tuareg nomads in the 12th century. Within 200 years it had become an immensely wealthy city, at the centre of important trading routes. 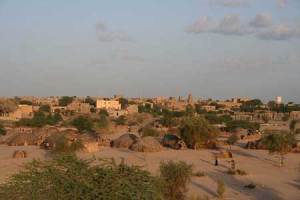 In the Middle Ages Mali, on the southern edge of the Sahara, was rich in gold and salt mines. When the emperor of Mali, Mansa Musa, went on a pilgrimage to Mecca in 1324, he was accompanied by 500 slaves each carrying a golden staff and he had with him 100 camels laden with gold, which he distributed lavishly. Stories of this magnificence were wildly exaggerated in the retelling. The houses in Timbuktu were said to be roofed with gold, and the city was thought not only to be a great centre of Arabic learning but also to contain lost Greek and Roman classical manuscripts.

The first European to reach Timbuktu was René Caillié (1799-1838) a penniless Frenchman who had been inspired to become an explorer after reading Robinson Crusoe. He reached the fabled city after an arduous journey on 28 April 1828. Caillié was preceded at Timbuktu by a British officer, Major Gordon Laing, but Laing had been murdered in September 1826 on leaving the city and Caillié was the first to return alive. In Travels through Central Africa to Timbuktoo (1830) Caillié wrote:

“I had formed a totally different idea of the grandeur and wealth of Timbuctoo. The city presented, at first view, nothing but a mass of ill-looking houses, built of earth. Nothing was to be seen in all directions but immense plains of quicksand of a yellowish white colour. The sky was pale red as far as the horizon: all nature wore a dreary aspect, and the most profound silence prevailed; not even the warbling of a bird was to be heard. Still, though I cannot account for the impression, there was something imposing in the aspect of a great city, raised in the midst of sands, and the difficulties surmounted by its founders cannot fail to excite admiration.”

Timbuktu made its fortune through trade, when salt brought in from the Sahara was worth its weight in gold. Slaves and ivory were also traded. Timbuktu has always been, and still is, relatively inaccessible. Its immense wealth made it famous, but it became known as synonymous with “the most distant place imaginable”.

Around 60 libraries in Timbuktu are still owned by local families and institutions, collections which survived political turbulence in the region as well as the ravages of nature. One is the Ahmed Baba Institute, established in 1970. The medieval scholar Ahmad Baba al-Massufi al-Tinbukti wrote 70 works in Arabic, many on jurisprudence but some on grammar and syntax. Deported to Morocco in 1591, he is said to have complained that the sultan’s troops there had pilfered 1,600 books from him.

During the period of French colonial domination of Timbuktu (1894–1959), hundreds of manuscripts were seized and burned and, as a result, many families there still refuse access to researchers for fear of a new era of pillaging. Other manuscripts were lost due to climatic conditions – for example, during droughts many people buried their manuscripts and fled. The manuscripts that survived range from tiny fragments to treatises of hundreds of pages, especially texts representative of the “Islamic sciences”, including grammar, mathematics and astronomy, historical chronicles, poetry, and marginal notes and jottings, which have proved to be a surprisingly fertile source of historical data.

Edward Lear might have written a limerick about Timbuktu, but it never occurred to him to do so. “There was an Old Man from Timbuktu…”