Victor Borge, the Danish pianist and comedian, used to tell how his uncle, an inventor, once crossed an Idaho potato with a sponge. “It tasted awful… but it sure held a lot of gravy!”

According to the Idaho Potato Commission – there is such a thing, I kid you not – “Idaho’s growing season of warm days and cool nights, ample mountain-fed irrigation and rich volcanic soil, give Idaho Potatoes their unique texture, taste and dependable performance.” There’s more: “Idaho grown potatoes have a high solids content, so there’s more potato and less water. The high quantity of starch grains cook to a light, fluffy texture and full, firm appearance when properly prepared… Cook with the skins on whenever possible and steam, rather than boil, potatoes.”

About 250 million years ago, the world consisted of a single giant landmass now known as Pangaea. Geological forces broke it apart and the movement of tectonic plates created the continents familiar today. Over eons, different species of plants and animals evolved on the separate land masses. After Christopher Columbus, in what historian Alfred W. Crosby has labelled the Columbian Exchange, the activities of discoverers and explorers reunited the world’s long-separate ecosystems.

The potato is a good example. Potatoes were domesticated in southern Peru between 8000 and 5000 BCE. In the Altiplano, they provided the principal energy source for the Inca Empire, its predecessors, and its Spanish successors. Sailors returning from Peru to Spain with silver took maize and potatoes for food on the trip. Historians speculate that leftover tubers and maize were taken ashore and planted.

The English word potato comes from Spanish patata (the name used in Spain). The Spanish Royal Academy says the Spanish word is a compound of the Taino batata (sweet potato) and the Quechua papa (potato). The name potato originally referred to a type of sweet potato rather than the other way around. The 16th-century English herbalist John Gerard used the terms “bastard potatoes” and “Virginia potatoes” for this species, and referred to sweet potatoes as “common potatoes”. Potatoes are occasionally referred to as “Irish potatoes” or “white potatoes” in the United States, to distinguish them from sweet potatoes.

The potato arrived first in Spain around 1570 and then reached the British Isles between 1588 and 1593. Basque fishermen from Spain are said to have introduced the tuber to western Ireland, where they landed to dry cod. The English privateer Francis Drake, returning from his circumnavigation of the globe, or Sir Walter Raleigh’s employee Thomas Harriot, are commonly credited with introducing potatoes to England. 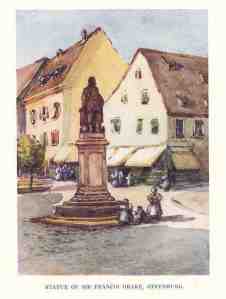 In this belief, in 1853 an Alsatian sculptor named Andreas Friederich erected an impressive bronze statue of Sir Francis Drake in Offenburg, southwest Germany. It was nine feet tall and stood on a 14-foot pedestal of sandstone in the town’s main square. Drake was represented standing on his ship at Deptford on 4 April 1587, having just received a knighthood at the hands of Queen Elizabeth. He held in his right hand a map of America, and in his left a bundle of potato stalks, with the roots, leaves, flowers, and berries attached. His arm leant on an anchor, over which a mantle fell in ample folds. 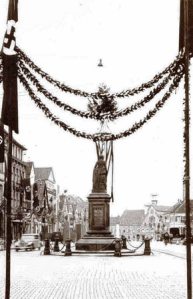 On each side of the pedestal were inscriptions, the first being, “Sir Francis Drake, the introducer of potatoes into Europe, in the year of our Lord 1586.” The second, “The thanks of the town of Offenburg to Andreas Frederich of Strasburg, the executor and founder of the statue.” The third, “The blessing of millions of men who cultivate the globe of the earth is thy most imperishable glory.” And the fourth, “The precious gift of God, as the help of the poor against need, prevents want.” Not surprisingly the statue was destroyed by the Nazis prior to the Second World War.

A 16th century English sea captain makes a strange bedfellow for a 19th century German sculptor, unless of course he was keen on potatoes and passionate about gravy. Some people are, you know.